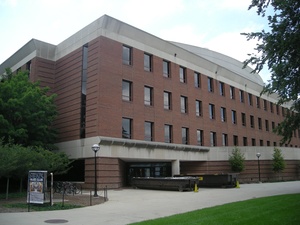 UM Chemistry is housed in the Chemistry Building on North University, on the inside of the bend North U takes east of Fletcher Street. Chemistry is actually a complex of two or three buildings, ranging from older to newer as you move eastward along North U. Entrances are on all sides.

The western entrances to the older building open into bland beige halls with a few lecture halls and small classrooms. Southern entrances off the Diag and northern entrances off North University mostly open into long hallways; the southeastern and eastern entrances open in the new building's Atrium. The Atrium is four floors high, contains some planters, often service groups or fraternities/sororities selling bagels or donuts, and usually is packed with students waiting to get into 1800, the large lecture hall.

The Science Learning Center, open 9am-9pm, also has its entrance off the Atrium. Go to the SLC for vending machines, office supplies vending machines, reserve copies of textbooks, many computers (although frequently full), and desks and alcoves for quiet work, as well as many GSIs' office hours.

The basement level is full of orgo labs and lecturers' offices. Most professors' labs are along floors 2 and 3. You can find empty "Hazardous waste" buckets & bottles on the second floor, southeastern side of the middle building, opposite the main undergraduate Inorganic lab and the student NMR instrument. (Trust me: this could come in useful. Those bottles are hard to find anywhere else.)

Ed Burton, exploder extraordinaire, runs most of the Chem lecture demonstrations. He is famous for mini-cannons in the Atrium, flaming Gummi bears, and freezing & unfreezing balloons with no damage.