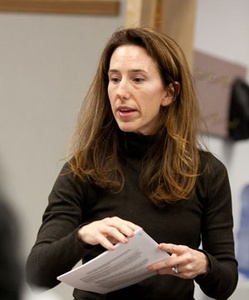 Christine Stead at a March 2013 committee meeting of the Ann Arbor Public Schools board. (Photo courtesy of The Ann Arbor Chronicle.)Stead was appointed to the AAPS board in March 2010 after being selected by the trustees in the wake of Adam Hollier’s resignation, which he announced at the board’s Feb. 3, 2010 meeting. She was selected on a 4-2 vote by trustees from among eight candidates. That partial term ran through Dec. 31, 2010.

Stead is an executive strategist for Ann Arbor-based Blue Cottage Consulting Inc., with a focus on healthcare organizations. She has served as a principal or partner in several other firms, including ECG Management Consultants, CSC, and ACS Healthcare Solutions.

Stead holds two degrees from the University of Michigan – a bachelors in cellular & molecular biology, and an master of health services administration (MHSA) in health management and policy.

She is married to Jim Stead. The couple has two sons, Aidan and Conleth, who attend Ann Arbor public schools. The family lives on the northwest side of Ann Arbor, near Skyline High School.