Chuck Warpehoski (b. 1978) is the director of the Interfaith Council for Peace and Justice, an Ann Arbor nonprofit with the mission to "inspire, educate, and mobilize people to unite across differences and to act from their shared ethical and spiritual values in pursuit of peace with social and environmental justice." 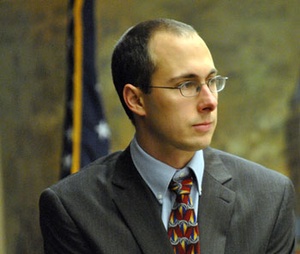 Warpehoski serves as a Democrat on the Ann Arbor City Council representing Ward 5, having first been elected in 2012. That year he won the Ward 5 Democratic primary against Vivienne Armentrout. He then defeated Republican Stuart Berry in November 2012. He was re-elected to a second term in November 2014, running unopposed.

He developed and sponsored an ordinance regulating smoking outside of public buildings and also potentially in areas of some city parks. The ordinance was passed by the City Council in April 2014.

Warpehoski is Adopt-A-Park coordinator for Winewood-Thaler Park, and served on the steering committee for the More Buses campaign, which supported a new transit millage to expand services of the Ann Arbor Area Transportation Authority. The millage was approved by voters on May 6, 2014.

Warpehoski is married to Nancy Shore, director of the getDowntown program. They have two children, Camille Shore and Oren Warpehoski (ages 3 and 1, respectively, in mid-2014). They are members of the Ann Arbor Friends Meeting (Quaker).

Nov. 4, 2014: Re-elected to a second two-year term on the Ann Arbor city council in Ward 5. He was unopposed in the general election.

Aug. 5, 2014: Won Democratic primary for Ward 5 city council against Leon K. Bryson, whose name appeared on the ballot but who had announced that he did not intend to campaign for the seat.

Nov. 7, 2012: Won the general election against Republican Stuart Berry to represent Ward 5 on the city council – his first elected office.

Aug. 7, 2012: Won Democratic primary election for Ward 5 city council against Vivienne Armentrout. Warpehoski polled 56.5% to Armentrout’s 43.5% to win a place on the ballot in November 2012.

2006: Named as a Michigan Political Leader Fellow at the Center for Progressive Leadership.

2003: Hired as director of the Interfaith Council for Peace and Justice.

2002-2004: Worked as webmaster for the Latin America Solidarity Coalition.

2001-2002: Worked as program coordinator for the Nicaragua Network.

2001: Graduated from Grinnell College with a BA in sociology.

Crusaders of many religions fight for peace and justice – Washtenaw Voice, Feb. 6, 2012