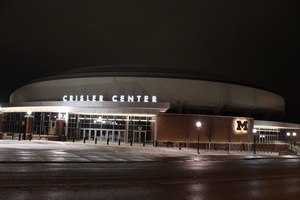 The Crisler Center (formerly known as Crisler Arena) is the home arena for the University of Michigan men's and women's basketball teams. Constructed in 1967, the arena seats 13,751 spectators. It is named for Fritz Crisler, head football coach at Michigan from 1938 to 1947 and athletic director thereafter until his retirement in 1968. It is located at 333 E. Stadium Blvd, next to Michigan Stadium.

It has been nicknamed "The House That Cazzie Built" in reference to Cazzie Russell, the All-American player whose success largely inspired its construction. Many area sports fans have long believed a new arena should be constructed as this facility is showing signs of age and is less impressive than newer contemporaries at other Big Ten universities.

The arena is also used for graduations and concerts.