Dan Smith is a Washtenaw County Commissioner representing District 2, which covers a small part of northern Ann Arbor as well as the townships of Superior, Salem, Ann Arbor, Northfield and Webster in the northeast part of Washtenaw County. 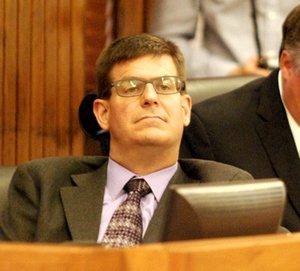 Dan Smith at the Aug. 6, 2014 meeting of the Washtenaw County board of commissioners. (Photo courtesy of The Ann Arbor Chronicle.)

Smith, a Republican, was first elected in 2010 to a two-year term starting Jan. 1, 2011. He defeated incumbent Democrat Ken Schwartz in the November 2010 election, and subsequently was re-elected in 2012. He is running again in 2014, and is unopposed in both the August primary as well as the November general election. He is one of only two Republicans on the 9-member board of commissioners, along with Alicia Ping of Saline.

From 2008 to 2010, Smith served as a trustee for Northfield Township. He is active in the Republican Party, and is a statutory member of the Washtenaw County Republican Party executive committee.

Smith is single and lives in Whitmore Lake. He plays trumpet in the Washtenaw Community Concert Band, and is a member of the German Park Recreation Club.