Dave DeVarti (b. 1952) was the owner and publisher of Current Magazine until the sale of that magazine to the Adams Street Publishing in 2007. 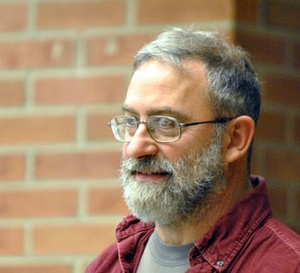 Dave DeVarti at a September 2012 Ann Arbor city council meeting. (Photo courtesy of The Ann Arbor Chronicle.)On Nov. 4, 2014, DeVarti was elected to the Washtenaw Community College board of trustees. The top three vote-getters were elected to the board: Ruth Hatcher (38,595 votes), Christina Flemming (30,789 votes) and DeVarti (19,973 votes). He outpolled incumbent trustee Mark Freeman by 57 votes.

DeVarti served on Ann Arbor City Council as a Democrat representing Ward 4 from April 1987 to April 1988. He served on the Board of the Ann Arbor Downtown Development Authority from 1991 to 2008. He remains active in the Democratic Party, and worked on the 2014 mayoral campaign for Sabra Briere. He's known for his advocacy on affordable housing issues and free speech.

DeVarti is the youngest son of Dominick DeVarti (founder of Dominick's restaurant) and is married to Ellen Rabinowitz, the executive director of the Washtenaw Health Plan and the county's public health officer. They have two children, Julia and Sam. They live in the Burns Park neighborhood.