David A. Santacroce is a University of Michigan law professor and associate dean for experiential education who specializes in civil rights and health care issues. He is the founder and president of the Center for the Study of Applied Legal Education, a non-profit corporation housed at the Law School. 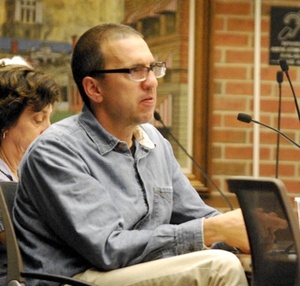 David Santacroce at a July 2014 meeting of the Ann Arbor park advisory commission. (Photo courtesy of The Ann Arbor Chronicle.)

Santacroce chaired the city of Ann Arbor's North Main-Huron River Vision Task Force, which was created by city council in May 2012. It was tasked with developing a vision to create/complete/enhance pedestrian and bike connections from downtown Ann Arbor to Bandemer Park and Huron River Drive; increase public access to the riverside amenities of existing parks in the North Main–Huron River corridor; ease traffic congestion at Main and Depot streets at certain times of day; and recommend use of the DTE/MichCon property at Broadway. The task force also developed recommendations for the city-owned 721 North Main site. The group's final report was delivered to the city council in September 2013.

He was appointed to the city's public market advisory commission – which gives guidance regarding the farmers market – in April 2011 for a three=year term, then reappointed for a term from June 1, 2014 to May 30, 2017. He served as chair of that group during his tenure.

Santacroce was also appointed to the park advisory commission, filling a seat vacated by Julie Grand, for a term from November 7, 2013 to October 18, 2016. In August 2014, PAC members elected him chair for a one-year term starting Sept. 1.