Diane Giannola is a molecular biologist, project manager and former member of the Ann Arbor City Planning Commission. On Nov. 4, 2015 – the day after the general election – she pulled petitions to run in 2016 for Ann Arbor City Council in Ward 4. That seat is currently held by Democrat Graydon Krapohl. 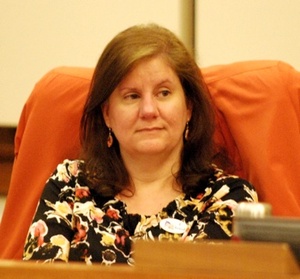 Diane Giannola at a May 6, 2014 meeting of the Ann Arbor planning commission. (Photo courtesy of The Ann Arbor Chronicle.)Giannola was first appointed to the planning commission in July 2009. She was reappointed by the city council in 2012 for a term ending June 30, 2015. However, she resigned in September 2014 and was replaced by Sarah Mills to fill the remainder of that term.

She also served on the city's Historic District Commission from 2007 to 2010. She was nominated to both the HDC and planning commission by John Hieftje, who was mayor at that time.

Giannola is active in Democratic Party politics and has generally supported candidates who are aligned with Hieftje and current mayor Christopher Taylor.

In May 2014, the Ann Arbor Chronicle identified Giannola as the publisher of the anonymous weblog Middle of the Left.