Donald E. Shelton is a former 22nd Circuit Court judge in Washtenaw County, Michigan. He served for 24 years before retiring on Aug. 29, 2014. His courtroom was in the county courthouse at Main and Huron in downtown Ann Arbor. From 2010-2013 he served as chief judge. (Shelton turned 70 in June 2014. According to Michigan state law, only a person under the age of 70 can be appointed or run for the position of judge.) 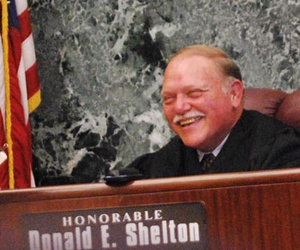 The circuit court tries felonies and criminal matters, family law, and civil disputes where claims are greater than $25,000.

A few months before retiring from the bench, Shelton accepted a teaching position at the University of Michigan-Dearborn. He was appointed as an associate professor and director of the Criminal Justice Studies program.

He received his M.A. in Criminology and Criminal Justice from Eastern Michigan University, his J.D. from the University of Michigan Law School and has authored numerous texts and articles. His primary interests include the jury system, criminal procedure, and the impact of technology in the law.

From 1987-1990, Shelton served as an Eastern Michigan University regent – an appointed position. He was mayor of the city of Saline from 1978-1986, and a Saline city councilmember from 1976-1978. He also was previously a member of the city’s planning commission, urban design commission, economic development corporation, and tax increment finance authority. Saline’s “Shelton Industrial Park” was named in recognition of his community efforts. In 2007, Shelton received the Frank J. Kelley Distinguished Public Servant Award presented by the State Bar of Michigan. In 1994, he was nominated as a candidate for the Michigan Supreme Court. In 1992 he received the “Justice Blair Moody Judge of the Year” Award.

Shelton was born on June 28, 1944, in Jackson, Michigan. He is married to Marjorie K. Shelton and lives in Saline.

His other interests include genealogy. He contributed background for an article by local historian Laura Bien, published on April 29, 2011 in The Ann Arbor Chronicle: "In The Archives: Story Makes Full Circuit."