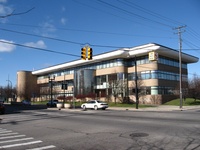 "The spaceship has landed" - EMU College of Business

Eastern Michigan University's College of Business is an accredited teaching college with undergraduate and masters degrees in business. The CoB is active in a number of regional and statewide economic development programs, such as the Michigan Smart Zone, the Michigan Small Business & Technology Development Center (MISBTDC), and US Export Assistance Program.

The CoB's current home, the Gary Owen Building, was constructed on Michigan Ave just after the Ypsilanti Historic District was set up; the University's exemption from local regulation allowed a design that local preservationists have sighed over for three decades. Dean Mielke commented at an YpsiVotes forum held at the CoB that his department was seen as a beachhead downtown that the University would gradually extend to connect with; left on its own decades later, he said, the CoB feels more a part of the community than departments on the main campus.