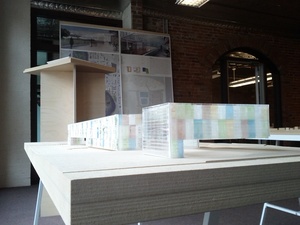 A model of "storefront/ribbon", one of two concept designs for the rec center, on display at SPARK East in September 2012

The Eastside Recreation Center was a plan by the Washtenaw County Parks and Recreation Commission to locate a new county recreation center on Michigan Avenue in Ypsilanti. WCPARC began the planning process in 2011, and cancelled the project 5 years later, in August 2016, citing rising construction and site preparation costs.

The effort began in late 2011, when WCPARC approached the City of Ypsilanti about the possibility of locating a new county recreation center on the city's Water Street property.  The City cautioned that tax-paying construction was the top priority for the property, but ​agreed to explore the concept, with the hope that a destination use could help attract additional development to the site. Ypsilanti Township officials also expressed general support, stating that the location would provide better access to Township residents living north of Ford Lake than adding the rec center to Rolling Hills. 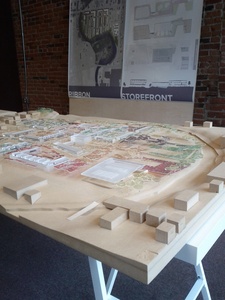 Over the course of 2012, WCPARC worked on preliminary planning and designs for the rec center, supported by a team of architecture faculty and students from the University of Michigan, and with the Ann Arbor Y on hand as a likely partner to operate a future facility. The center was to be located at the northwest corner of the Water Street property, adjacent to the Michigan Avenue crossing of the Huron River and the Border to Border Trail.

WCPARC negotiated a $1 purchase agreement with the city for an 8-acre parcel, targetting a 44,000 square foot facility, but delayed construction planning until 2015, citing a desire to wait until after their millage renewal in 2014 to ensure they had the stability to develop a new center.

In May of 2016, frustrated with a lack of visible progress, County Commissioner Ronnie Peterson and State Representative David Rutledge hosted a meeting to discuss the project, questioning WCPARC's commitment to the project.  WCPARC Director Bob Tetens noted that cost estimates had grown from the initial $10m estimate to $16m, exceeding the Commission's budget.

At the August 2016 WCPARC meeting, Director Tetens recommended the Commission "officially notify the City of Ypsilanti and the Ann Arbor Y of our intent to withdraw our interest," effectively ending discussion of building a recreation center on the Water Street property.