Edward Surovell is founder of Edward Surovell Realtors, a regional real estate company based in Ann Arbor. The business was acquired by Howard Hanna in 2012. He has served on the Ann Arbor District Library board since 1996, and was re-elected again on Nov. 4, 2014 for another four-year term beginning on Jan. 1, 2015. 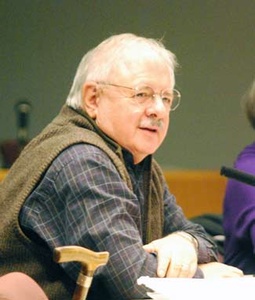 Ed Surovell at a January 2014 meeting of the Ann Arbor District Library board. (Photo courtesy of The Ann Arbor Chronicle.)

Surovell grew up Washington, D.C. He attended Columbia University in New York and moved to Ann Arbor in 1968, where he was a graduate student at the University of Michigan. After the completion of his studies, he entered real estate in 1973. From residential sales, he moved to sales manager, and finally in 1982 opened his own firm in Ann Arbor with three associates and a small office.

Surovell's significant philanthropic focus is cultural enrichment and public health. An avid collector of rare books, he has served on the Ann Arbor District Library board of trustees since 1996, when he was elected to the first board after the library system separated from the Ann Arbor Public Schools. In the November 2014 election, Surovell was one of three candidates who ran in the nonpartisan race for three seats on the board. He got 22,613 votes (33.53%). The two other seats were won by incumbent Jan Barney Newman (23,414 votes – 34.72%) and Jim Leija (20,868 votes – 30.94%), who was seeking his first term on the board. Incumbent Barbara Murphy did not seek re-election.

Surovell's other board service includes the Library of Michigan Foundation, the Michigan Historical Commission, the Historical Society of Michigan, and Chamber Music America. He has also served on the Ann Arbor planning commission as well as on the board of various civic and business groups.

He lives in Ann Arbor with his wife Natalie, a commercial interior designer.