The Federal Screw Works plant just south of downtown Chelsea, at 500 S. Main Street, closed on April 30, 2005. In the fall of 2007, Magellan Properties purchased the property with the intent of razing and redeveloping it. The Chelsea Screw Works, founded in 1913, was merged into Federal Screw Works in 1928.

Federal Screw is based in St. Clair Shores, Michigan, and operates several other plants around the state. The 80,000 square foot plant in Chelsea reportedly once employed 500 people, but only 37 employees remained by the time it closed.

The Federal Screw Works plant in Chelsea began in 1913, as Chelsea Screw Works, in a Glazier factory building on Jackson Street that later became Longworth Plating. The company was founded by Malcolm J. Dunkel, who had worked for several other machining companies in the area, and was considered a brilliant mechanical designer. Approximately 95% of the plant's early production was made up of bolts, nuts, knobs, and other parts for the automotive industry.

The first part of the current site on South Main was a 4,000 square foot building constructed in 1917; the location was chosen for its proximity to a Consumers Power substation, which primarily provided power for the Detroit Urban Railroad. In 1919, the "Industrial Victorian"-style office wing was added on South Main, and, in 1925, the plant expanded west to Congdon Street, with an Art Deco-style office facade on Congdon and a total size of 30,000sf.


In 1928, Chelsea Screw merged with Federal Screw Works. The plant survived through the Depression to a strong recovery during World War II, when it produced artillery shells and other weaponry; during the war, Federal Screw expanded to temporary space throughout Chelsea, including the Clock Tower, Chelsea Grinding Company, and Hoover Ball Bearing Plant.

Ann Arbor-based Magellan Properties' proposed redevelopment, as reported by the Ann Arbor News, involves demolishing the existing buildings. Magellan partner Rene Papo told the News, "Basically we bought it for the land," at a cost of $530,000. Under the proposed plan, the factory buildings will be replaced with five one-story buildings, totaling 32,000 square feet, and 150 parking spaces, housing approximately a dozen businesses. The project will involve cleanup of contamination on the site, and the buildings are proposed to meet LEED environmental standards.

The project was tabled at the Nov. 22 Planning Commission meeting. Some critics of the plan, affiliated with Preservation Chelsea and the Chelsea Area Historical Society, would like to see some of the existing buildings preserved; others would like to see a two-story development that better matches downtown Chelsea, with office or residential space above the commercial uses; some neighbors would prefer the use not be commercial at all; and, beyond these concerns, Chelsea is updating its Master Plan, which could affect the vision for this part of the city. Magellan would like to have these concerns resolved (overcome) and gain final approval for the plan within 6 months.

According to Magellan's Rene Papo, Federal Screw Works made a condition of the sale that the property not be used for residential purposes, apparently due to concern for contamination-related liability. While the exact nature of contamination has not been stated, brownfield redevelopment practice frequently involves cleanup of contaminated sites for residential use, with the developer capturing tax revenues as reimbursement for the costs of cleanup. It is unclear whether Magellan or Federal Screw Works have any experience with brownfield remediation projects, but Papo has cited a cost of $350,000 to remediate the site contamination to non-residential standards.

Papo returned to the Planning Commission's January 15th meeting to withdraw his request for a purely-commercial rezoning, and stated an intent to pursue a PUD project, and that Magellan, "will use its best efforts to have the site remediated to allow second floor residential and will work with the seller to remove the residential deed restriction." The group Citizens to Keep FSW Heritage has met with Papo to urge him to preserve the two significant portions of the building, and express their support for a more intense use of the site. 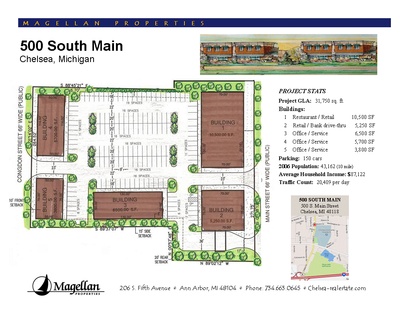 In February 2010, Concentrate reported that Magellan was finishing the paperwork for brownfield development, and hoped to have the building demolished and construction started by mid-2010. One possible tenant in the proposed complex of five buildings would be a surgery consulting office, according to Magellan partner John Langs.