Felicia Brabec is a clinical psychologist and a Democrat who represents Pittsfield Township (District 4) on the Washtenaw County board of commissioners. She was elected chair of the board in January 2015. 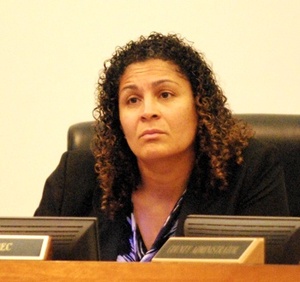 Felicia Brabec (D-District 4) at a March 2014 meeting of the Washtenaw County board of commissioners. (Photo courtesy of The Ann Arbor Chronicle.)Brabec was initially appointed by the county board to fill a vacancy in District 7 following the resignation of Democrat Kristin Judge. She prevailed in a special election held in May 2012 to fill the remainder of that term (through 2012). She then won the November 2012 general election for a new two-year term beginning January 2013 to represent District 4. (A redistricting took effect for the first time in the November 2012 election, changing the district boundaries and shrinking the number of districts from 11 to 9.)

She was re-elected in November 2014 for another two-year term beginning January 2015.

By virtue of her role on the county board, Brabec has served on a variety of appointed boards and commission, including: Community Action Board, Community Corrections Board, Eastern Leaders Group Leadership Committee, Health Emergency Response Coalition, Southeastern Michigan Council of Governments (SEMCOG), and Sustainable Revenue for Supportive Housing Services Task Force.

Brabec also serves on the board of the nonprofit Food Gatherers.

She is married to David Brabec, a partner with the software development firm Moxie Group Inc. The couple has two young children, Viviann and Alex.

Jan. 7, 2015: Is elected by her fellow board colleagues to chair of the Washtenaw County board of commissioners for a one-year term.

Jan. 2, 2013: Is elected by her fellow board members to serve as chair of the board's ways & means committee, where action items for the board are given initial review and approval.

Nov. 6, 2012: Wins general election for the new District 7 (Pittsfield Township) with 10,506 votes (66.61%) over Republican Richard Conn’s 5,186 votes (32.88%). Redistricting took effect for the first time in this election, with the county divided into 9 districts compared to the previous 11 districts. She had been unopposed in the August 2012 Democratic primary election.

Feb. 28, 2012: Wins special Democratic primary election to be the Democratic candidate in the special May 8 election to represent District 7. She was unopposed.

October 2011: Is appointed by the Washtenaw County board of commissioners to fill a vacancy on the board following the resignation of Kristin Judge, who had represented District 7 (Pittsfield Township). She had been one of two candidates who applied for the job, along with Democrat Christopher Nielsen. Brabec had been encouraged by Judge to pursue the board appointment.

2005-2007: Staff psychologist and social worker at the University of Michigan.

2003: Earns doctorate in clinical psychology from The Illinois School of Professional Psychology.

1995: Earns a bachelor’s degree in sociology and anthropology from Saint Mary’s of Notre Dame.