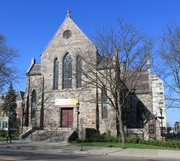 The First Congregational Church is a Congregationalist church located at the corner of State Street and William Street in Ann Arbor. The church dates to February 9, 1847, when 48 members organized to buy land. The cornerstone of the current stone church was laid on June 23, 1872 and the building was dedicated on May 10, 1876.

The church was designed by Gordon Lloyd, “one of the most prominent Gothic church architects of his time,” according to his great-granddaughter, Anne Upton, who lives in Ann Arbor. Other local examples of Lloyd’s work are St. Andrew’s Episcopal Church, Harris Hall, and the entrance to Forest Hill Cemetery. Around the state, his commissions included the Whitney home in Detroit (now the restaurant of the same name) and churches as far afield as Marquette.