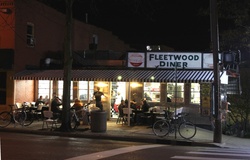 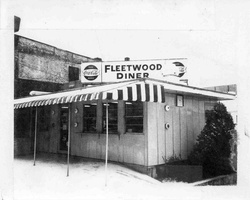 Currently owned by George Fotiadis and Adi Demiri, The Fleetwood is a diner on the southwest corner of Liberty and Ashley.

They serve up some of the best diner grub in Ann Arbor, 24 hours a day. Seating is extra tight in the winter when the tables outside are piled in the corner. Home of Hippie Hash, best ordered with extra veg. No, it's not getting torn down. Or maybe it is.

The Fleetwood was built from a kit by Donald Reid and originally named the Dagwood. Before 1948 the City building code required masonry for all new restaurant construction. On July 6 of that year Reid petitioned the city for a change in the building code, and on August 2 the City Council passed an amendment that appeared to be custom written for the Dagwood. It allowed metal construction for new buildings of 1000 square feet or less and no more than a single story, but only for restaurants and stores. (A similar amendment had been passed earlier for all-metal Lustron homes.)

Construction was started in the fall of 1948 and was complicated by the closing of the Dagwood Diner Company before the diner was finished. Costs totaled $14,000, and the diner opened on March 17, 1949 as the Dagwood Diner. Two months later Reid placed tables on the sidewalk and opened Ann Arbor's first sidewalk cafe.

Reid sold the diner to Robert Brown in 1966 and died in 1978. Mark Hodesh bought the Dagwood in 1971 and renamed it the Fleetwood. At that time the diner had been used for a variety of non-diner purposes, including as a prep kitchen for vending machine sandwiches. Hodesh later returned to Ann Arbor and bought Downtown Home and Garden, across the street. Former cooks bought the diner in bankruptcy court for $46,000 in 1984 after former owner Kaye Dumsick was unable to pay the bills. The Fleetwood has been owned by George Fotiadis and Adi Demiri since 1992. It is always open, except for occasional holidays and a spell during the 2020 pandemic.