Before all that, was: the Ann Arbor High School. Rubble located at Huron Street at State Street.

Now on the site: North Quad. 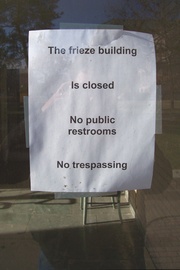 Find many, many more demolition photos at http://www.flickr.com/photos/tags/friezebuilding/