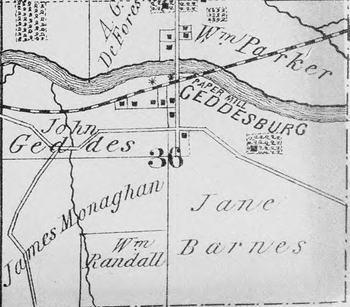 Geddesburg is a settlement founded in 1825 along the Huron River, roughly centered at the current location of Huron River Drive at Dixboro Road. It was a station on the Michigan Central Railroad. Land was purchased by brothers John Geddes and Robert Geddes, and a mill was built on the site.

Founded in 1832 by John and Robert Geddes, the agricultural milling hamlet of Geddesburg illustrates the tradition of water power economic opportunity which spurred westward expansion in 19th century America. Traversed by two Native American trails, the narrow of the Huron River between Chalmers and Fleming Creeks, was a strategic location. In 1824 Robert Fleming used creek water to power the first sawmill in Washtenaw County. The Geddes brothers harnessed the Huron River and constructed a saw mill in 1826. Paper pulp, Lime plaster and grist mills followed as more entrepreneurs built dams. A grist mill and a cider mill, built in the late 1800's by William Parker, are still extant and part of the Parker Mill Complex owned by the Washtenaw County Parks and Recreation Commission, built along the rivers southern shore in 1839, enabled transportation of mill and farm products. 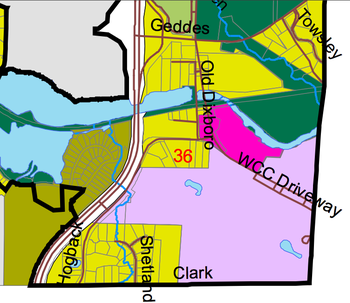