Krapohl , Graydon 12/23/1960 - 4/15/2020 Ann Arbor, Michigan Officer in the 2nd Battalion, 3rd Marines, 1st Marine Expeditionary Brigade, he met and married his wife Greta Krapohl, a U.S. Army Nurse Corps Officer. In his civilian career, Graydon worked in the Federal, nonprofit, and private sectors where he provided expertise in information technology, strategic planning, organizational design and development, program management, and leadership. Graydon proudly served as a member of the Ann Arbor City Council from 2014-2018 representing the 4th Ward. And before that, served as a City Parks commissioner. Graydon lived in the Lower Burns Park neighborhood with his family and cared deeply about his neighbors. Graydon worked tirelessly advocating for Veteran's rights and benefits and served proudly as a trustee and service officer at American Legion Post #46. Graydon's love for his family was deep and abiding. He will most be remembered as a loving husband and father, as a thoughtful and respected public servant, and for his desire to make the world a better place. Graydon is survived by his beloved wife of 32 years, Greta, and daughter, Grace. He is also survived by his parents Andrew and Patricia Krapohl, sisters, Tracy (Doug) Short, Kaye Krapohl, Kelly Krapohl, and Walter Krapohl, mother-in-law Gretchen White and sister-in-law Susan (Steve) McClane and several nieces and nephews. A virtual memorial service will be held on Saturday, May 2nd at 11 AM through the First Presbyterian Church and accessed at the following link: https://www.youtube.com/user/FirstPresA2. A Celebration of Life will take place in Ann Arbor later this summer. Memorial contributions may be made in Graydon's name to the Fisher House Michigan, https://www.fisherhousemichigan.org/legacy-gifts/krapohl an organization that he felt a deep personal connection to in support of serving veterans and their families. For a more detailed obituary and more information please visit www.niefuneralhomes.com

Graydon began his service as a Democrat on the Ann Arbor City Council in November 2014. He won his seat representing Ward 4 in the November 2014 general election. Because he was unopposed in the Aug. 5 Democratic primary, he did not appear on the ballot for that primary. He was also unopposed in the Nov. 4, 2014 general election. No Republicans or independents ran in any of the city's five wards that year. Krapohl was elected to a seat held by Democrat Margie Teall, who did not seek re-election. 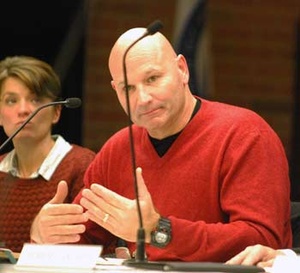 Graydon Kraphohl at a November 2013 meeting of the Ann Arbor park advisory commission. (Photo courtesy of The Ann Arbor Chronicle.)

A seventh-generation "Michigander," Graydon was born in Ann Arbor and raised in Jackson where he graduated from Napoleon High School. He received his Bachelors degree from the University of Michigan, his MBA from George Mason University and a Master’s Degree in Strategic Studies from the U. S. Army War College, where he serves as an adjunct faculty member.

Graydon currently serves as a Colonel in the United States Marine Corps Reserve. He entered the Marines in 1984 and served 9 years on active duty stationed with 2nd Bn, 3rd Marines in Kanaohe Bay Hawaii and as an instructor at The Basic School and the Infantry Officers course in Quantico Virginia. In the Marine Corps Reserve, he has held a variety of senior and mid level leadership, staff, teaching, training, and command positions. In the private sector, Graydon has worked for national consulting firms in operations management, information technology, and program management positions supporting both public and private sector clients.

Graydon and his wife Greta just celebrated their 25th wedding anniversary this year (2014). They have one daughter, Grace, at Tappan Middle School.

Krapohl's LinkedIn profile lists his current position as director of business operations for Merit Network, an Internet services nonprofit based in Ann Arbor. He joined Merit in May 2014. He previously worked for five years with Altarum Institute, another Ann Arbor-based nonprofit. There he worked on a range of projects, including managing Department of Defense healthcare initiatives and Department of Health and Human Services technology transfer for preventive health systems.

Krapohl lives on Golden Avenue in the Lower Burns Park neighborhood. He was nominated by mayor John Hieftje to the Ann Arbor park advisory commission and appointed by the city council in January 2012 for a term ending January 6, 2016. In September 2013, PAC members elected him as vice chair for a one-year term. Although typically the vice chair is subsequently elected as chair, Krapohl did not seek that position in 2014 because of his city council candidacy. He's expected to resign from PAC after his election to city council, but has expressed interest in becoming one of the two ex officio city councilmembers who serve on PAC. As of November 2014, the two ex officio councilmembers are Mike Anglin and Christopher Taylor, who was elected mayor on Nov. 4, 2014.

Krapohl, who plans to retire next year following a 30-year career in the military, is an adjunct faculty member with the U. S. Army War College, as well as a colonel in the U.S. Marine Corps Reserve. He and his wife moved to Ann Arbor in 2006 from the Washington, D.C., area, so they could raise their daughter here.