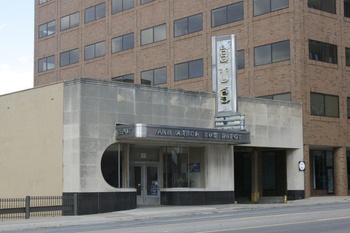 Ann Arbor's Greyhound station, originally the Ann Arbor Bus Depot, was built in 1940 in the Streamline Moderne style. It was designed by Cleveland, Ohio architects Banfield & Cumming and local architect Douglas Loree. The depot had been an Individual Historic Property on the Ann Arbor Register of Historic Places since 1988. It lost its historic designation in 2001. It is currently owned by the First Martin Corporation, which wanted to demolish and replace the Depot with a 10-story structure in 1998. In December 2013, First Martin proposed building a six-story, 110-room hotel where the bus depot and the neighboring Ann Arbor Convention and Visitors Bureau building stand. The Depot was demolished in 2014 to make way for the aforementioned hotel, although its facade and marquee are being preserved and will be incorporated into the new hotel.

The Greyhound station is now located on Depot Street in the Amtrak station.