Harold Brian Steele (August 6, 1887 - June 20, 1908) was a student at the University of Michigan in 1906-1907. He was one of the founders of the Lanthorne Club and a contributor to the university magazine The Inlander. 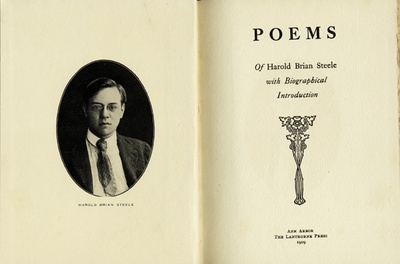 The frontispiece and title page of Steele's posthumous collection of poems, printed at the Ann Arbor Press.

According to the biographical preface to his posthumous collection of verse, POEMS (Ann Arbor: The Lanthorne Press, 1909), Steele would in his childhood frequently walk from his home in Charlotte to Albion "where he could take advantage of the college library. It was during this period of his life that be [sic for he] became acquainted with the works of Swinburne and Whitman, the influence of whom can be seen in his poems."

"Owing to financial difficulties he left college at the close of his first year, accepting charge of the schools of Foster City, Michigan. He intended returning to Ann Arbor to pursue his studies, but on June 20, 1908, just as he was completing a successful year at that place, he was prostrated by heat, dying the same day."