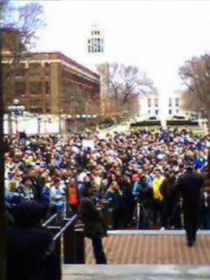 Hash Bash is an annual event held in Ann Arbor on the first Saturday of April. The event is a collection of speeches, live music, street vending, and the occasional civil disobedience centered around the goal of reforming federal, state, and local marijuana laws. The first Hash Bash was held in 1972.

Ann Arbor has very lenient laws regarding the possession of marijuana - a $25 fine and a simple civil infraction rather than a misdemeanor or felony. Even so, the campus of the University of Michigan is located in Ann Arbor, and anyone caught with marijuana on any campus location is subject to the regular state marijuana laws. As this is the case, there is a separate but heavily related event following Hash Bash just off campus known as the Monroe Street Fair, where there is a live show accompanying the many street vendors selling extravagant waterpipes, along with a Michigan NORML booth.