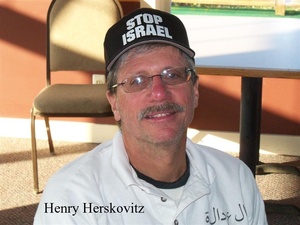 Henry Herskovitz is a retired engineer, motorcycle enthusiast and anti-Jewish Holocaust denier residing in Ann Arbor, MI. Henry is a native of Pittsburgh, PA. He holds an engineering degree from the University of Michigan, Ann Arbor.

Herskovitz is the founder of Jewish Witnesses for Peace and friends, a group that sees their mission as putting an end to what they perceive as “Jewish supremacism in Palestine” and a peaceful dismantlement of the state of Israel, chiefly by means of boycotts, divestments and sanctions, coupled with a termination of all US aid to Israel. The group has staged a silent vigil and protested on the public sidewalk adjoining Beth Israel Congregation since September 13, 2003. The group says the protests will end when the Board of Directors of the congregation publicly states its full support for: full civil and political equality of the Arab-Palestinian citizens of Israel within Israel; prompt implementation of the rights of Palestinian refugees of 1947-8 and 1967 to return to their homes and properties in Israel and Palestine as stipulated in UN resolution 194; and, prompt end of Israeli occupation and colonization of all lands seized by Israel in 1967. Herskovitz himself said that he would stop protesting when the Congregation takes down the Israeli flag. Herskovitz has made regular appearances at Ann Arbor City Council meetings to discuss his group's views on the Israel-Palestine conflict, and religiously attends the Sabbath Vigil of the JWPf. Herskovitz publishes vigil reports on a weekly blog that generally consists of fervent denunciation of Jews as a group and seeks to describe violent animosity towards Jews as largely justified and provoked by Jews themselves..

Herskovitz is on the Board of Advisors and Directors of Deir Yassin Remembered, organization that was founded to “educate the public about the 1948 massacre of more than 100 Palestinian civilians by Jewish terrorists at the village of Deir Yassin and to seek justice to the victims of the massacre”, and that strives to “heighten awareness, particularly on the part of the American public concerning Palestinian grievances, and thus enhance support for a just and durable resolution to the conflict.” . In response to its apologetics regarding the Nazi extermination of Jews during the Second World War and championing of racial hatred targeting Jews, Deir Yassin Remembered has been declared a "hate group" by the Southern Poverty Law Center (SPLC). The Executive Director of Deir Yassin Remembered responded to SPLC's declaration, "Castigated by the Southern Poverty Law Center".

Herskovitz is a member of  Jews for Justice for Germans (JFJFG),  an group whose aims and objectives include calling on Elie Weisel to apologize for his statement calling on Jews to “set apart a zone of hate -- healthy virile hate” for Germans, to open the discussion of the history of “interactions between Germans and Jews 1933-1945” and to repeal all Holocaust denial laws,  to end German reparation payments to Israel and Jewish survivors of Holocaust, to discuss the possible repayment of reparations back to Germany, and to “ begin discussions about the role of Jews in the suffering inflicted on Germans since 1945 and, if appropriate, to make arrangements for apology, reparation and compensation."

Herskovitz is an outspoken anti-Zionist and historical revisionist,. Herskovitz shares the views ofErnst Zundel, a German publisher known for promoting Holocaust revisionism and author of the "Hitler we Loved and Why" who was jailed for "spreading false news" but the conviction was later overturned by the Supreme Court of Canada when the law criminalizing reporting false news was ruled unconstitutional. Following his visit, Herskovitz wrote, "Ernst Zundel, the reputed anti-Semitic devil, did not merely shake hands with me; he held mine in his. Eight years later the memory remains strong." On his blog, Herskovitz published a test to distinguish “a peace and justice activist” from a “Zionist pretender”.

"Has the world indeed been duped into believing that the National Socialist government of Germany were the all-time perpetrators of ultimate evil in the world, or has the fabric of the standard Holocaust narrative been ripped substantially by Hilberg’s admission, now thirty years old?" http://blog.deiryassin.org/2015/08/05/re...

"Haven’t the German people – seventy years after the real or alleged crimes of WWII – suffered sufficiently?" … "the German people get tossed under the wheels of the Jewish Power bus." http://blog.deiryassin.org/2015/06/24/re...

"Jews know hatred, and they also know manipulation. How to conceal the obvious hatred their religion and culture promote, while in true Orwellian fashion accuse others of what they do best."http://blog.deiryassin.org/2015/04/26/re...

Beth Israel congregants reflect on 10 years of protests at synagogue: 'We certainly didn't ask for this', AnnArbor.com, August 25, 2013

Herskovitz in his own words. From a Letter to the Editor of the Ann Arbor News. February 25, 2004.