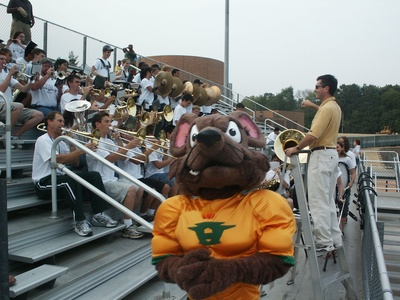 One of Ann Arbor's large high schools (the others are Pioneer and Skyline). Huron is located at 2727 Fuller Road, at the intersection with Huron Parkway, across from Gallup Park. The school is built across several small hills, roughly in the shape of a capital H with its arms curving out to the sides. The school's athletic teams are known as the River Rats.

Each wing is numbered, and generally classes of a particular subject are taught in certain wings. Each section is known by its wing and floor number---for example, the second floor of wing 6 is called the "6200 hallway".

On the west side of the building, the southern wing (the lower-left arm of the 'H') is numbered 3100. The cafeteria and associated prep facilities occupy the entire first floor of this wing; art and architecture classrooms are on the second floor. The northwest wing, numbered 2100, contains some special-education and general-purpose classrooms, but is mostly unexcavated hillside. The 3200 hallway contains various vocational labs, including graphic design, mechanical drafting, and an automotive shop. West of the center of the building is a circular pod containing gymnasium and pool facilities, numbered in the 1000s. A new gymnasium and olympic-size swimming pool were built in the late 1990s; the original pool, room 1100, was filled in in the late 1990s and converted to a weight room, but the original gym and its distinctive dome remain upstairs.

The crossbar of the "H", section 4, does not have a first floor; a roadway runs between the two parts of the building. (After decades of discussion, the roadway was closed to traffic in 2005) To compensate for the lack of space on the first floor, this section has the only third story on the building; hallways 4200 and 4300 are together known as The Arch. This feature, one of the most distinctive parts of a very distinctive building, became the namesake of the school's newsletter to parents. The Arch has computer labs and classrooms for the school's Business Education department on the second floor; hallway 4300 is devoted to the English department, with a small room in the northeast corner serving as an office for the Yearbook (Enthymion).

On the east side of the building, the northern wing contains the school library on the first floor and nearly a dozen labs on the second floor for the school's four lab sciences: Biology, taught to all ninth-graders; Physical Science or PhySci taught to tenth graders; Chemistry or AP Chemistry taught to 11th graders; and Physics, AP Physics, and AP Biology taught to twelfth-graders.

The southeast wing, section 6, is best thought of in three parts. The portion of the first floor nearer the building core is composed of a warren of administrative and counseling offices; roughly the same amount of the second floor has classrooms and some offices of the Social Sciences department. The far section of the 6100 hall has a couple classrooms, the offices of the Mathematics department and the school's COE office. Upstairs are a half-dozen classrooms used by the Math department.

Finally, in a round section opposite the gymnasium facilities, is the building theatre; a late-1980s addition holds classrooms and storage for the school bands and the music department. The Huron theatre is one of the few high school theatres with actual linesets (as opposed to fixed pipes) for equipment to be hung on, a 35-foot-wide stage, and a fairly well-equipped construction shop. The auditorium has seating for about 500, with a balcony seating another 250 or so. The balcony and the section of the main floor under it have movable walls so they can be divided into classrooms holding about 100, 70, and 70 seats each.

Huron was built in the late 1960's with an opening scheduled for 1968.However, delays forced the opening to be pushed back to 1969. The result of the delays was that the Pioneer High School Building hosted both Pioneer and Huron schools in 1968/69.  The 2,189  Pioneer students attended from 7:30 AM to 12:30 PM and the 1,348 Huron students attended from 1:00 PM to 6:00 PM. Class times were reduced to 45 minutes. In the 1980s, the math and social science and lab science wings were expanded, giving the school space for about 1,800 students, but by 2000 there were nearly 2,100 students enrolled, with first- and second-year classes topping 500. A small handful of portable classrooms were added in the 1990s, but by 2000 it was clear that there was no way to expand the building on its small lot; combined with similar overcrowding problems at Pioneer High School, serious talks began on building a new high school.

Huron High School was authorized as an International Baccalaureate World School in January of 2017. It offers the IB Diploma Programme (DP) in 11th and 12th grades and is in the candidate phase for the Career-related Programme (CP), expected to be authorized in the fall of 2018. The CP options include engineering, business, and automotive services. Students can pursue the Diploma Programme, the Career-related Program, or take IB classes without completing either program in full.  More on the IB program at Huron can be found at https://www.a2schools.org/Page/12858

The school district also provides a Primary Years Programme (PYP) at Mitchell Elementary School, for grades K-5 and a Middle Years Programme (MYP) in partnership at Scarlett Middle School and Huron High School, for grades 6-10. Professional and curriculum development took place over a three year period of candidacy preceding the certification. For more on the implementation and components of the IB program in Ann Arbor Public Schools, see http://a2-ib.blogspot.com/.

Unable to include Aaps