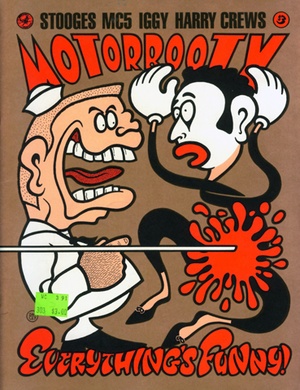 Motorbooty #5 featured a tour of the Stooges Wax Museum.

Mythical (or is it?) museum for the works and career of Iggy Pop. Also known as the "Stooges Wax Museum", it was located - or would have, had it existed - in the ICC's Luther Buchele Cooperative House on Hill Street, which was also the one-time home of the evolving stream of the MC5, the White Panther Party, and the Rainbow People's Party.

Overheard by Bob Dively: Customer in music section: "Do you have any Iggy Pop?" Target Kid: "The pop is over the food section."

Forty years ago this month, the album “The Stooges” was released by the Ann Arbor band founded by Iggy Pop, to nearly non-existent sales and generally scathing reviews. Still, it has survived the test of time as one of the — if not the — records most often cited as inspiring the punk rock movement.

Since Trainspotting, Pop’s cult status has only grown more formidable – the band's recent name-check in Juno tells you all you need to know about what the smart kids are thinking. But unlike youth heroes of "the Forever 27 club”, Iggy Pop is immortal. He’s like the Highlander – the only way to dispatch with him is a swift beheading. And don’t think he hasn’t tried. Pop is a living museum piece, but more a hands-on exhibit in the Science Museum to the Rolling Stones’ dusty relics.

He reveals to Dinah Shore that his mom worked at a military technology company that made bombs and missiles, and his dad ("Mister Pop") taught media communications at a local high school. At the time, brothers Tony and Hunt Sales, sons of the recently departed comedian Soupy Sales, were playing in Iggy's band.