Ingrid Sheldon (b. 1945) is a community volunteer who served in the office of mayor of Ann Arbor as a Republican from April 1993 to November 2000. She had previously represented Ward 2 on the Ann Arbor city council from April 1988 to April 1992. 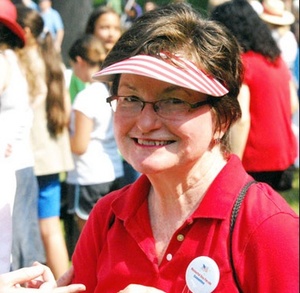 Ingrid Sheldon at the 2012 Glacier neighborhood Memorial Day parade, where she served as parade marshall. (Photo courtesy of The Ann Arbor Chronicle.)Sheldon was first elected mayor as a moderate Republican in 1993, defeating incumbent Democrat Liz Brater. That election was held on April 5, 1993. Subsequently, Ann Arbor mayoral elections were moved from April of every odd-numbered year to November of every even-numbered year, in order to coincide with state and federal elections.

In November 1994, Sheldon defeated Democrat David Stead. In 1996 and 1998, Sheldon beat then-city councilmember Chris Kolb, a Democrat. She did not seek re-election in 2000.

During her tenure as mayor, Sheldon served on the board of the Michigan Association of Mayors, and served as president of the Michigan Municipal League. She chaired the league's Let Local Votes Count campaign, an attempt in 2000 to pass a state initiative that would limit the state government's ability to overturn local municipalities' ordinances.

For many years Sheldon has worked as bookkeeper for the Huron Valley Tennis Club.

She is married to retired banker Cliff Sheldon, who had served on city council from 1978-1982. The couple – who live in the Glacier neighborhood on Ann Arbor's northeast side – has two grown children, Amy Cell and Bill Sheldon, and six grandchildren: Alexandria Cell, Olivia Cell, Kristina Cell, Henry Sheldon, Cole Sheldon, and Clark Sheldon.

2012: Joins the Our New Downtown Library committee to support a bond proposal for a new downtown building of the Ann Arbor District Library. (The millage is defeated by voters in November 2012.)

1998: Joins the board of the Heritage Foundation – United Methodist Retirement Communities.

November 1998: Defeats Democrat Chris Kolb again for another two-year term as mayor. She does not seek re-election in 2000.

November 1996: Defeats Democrat Chris Kolb, then a city councilmember, for another two-year term as mayor.

November 1994: Defeats Democrat David Stead for a two-year term as mayor. (The election for Ann Arbor mayor had been moved to November of every even-numbered year, to coincide with the general elections for state and federal office.)

1991: Joins the Rotary Club of Ann Arbor, which meets every Wednesday in the Michigan Union. Over the years she serves in various leadership roles.

April 1990: Is re-elected to second two-year term as a Republican on the Ann Arbor city council, representing Ward 2.

April 1988: Is elected to her first two-year term as a Republican on the Ann Arbor city council, representing Ward 2.

1970: Earns masters degree in education from the University of Michigan.