Janis Bobrin is the former Washtenaw County Water Resources Commissioner, an elected position she held for six terms from 1989 through 2012. 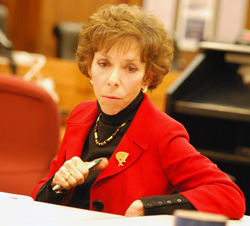 Janis Bobrin at a Feb. 9, 2011 budget retreat of the Washtenaw County board of commissioners. (Photo from The Ann Arbor Chronicle.)She serves on the Washtenaw County Parks & Recreation Commission, as well as on several nonprofit boards statewide and locally – including the Michigan League of Conservation Voters, the Huron River Watershed Council, and Dawn Farm. She also is an advisory board member for the Girls Group.

Prior to her election as water resources commissioner (originally called the county drain commissioner), Bobrin worked as manager of water quality programs for the Southeast Michigan Council of Governments (SEMCOG).

Bobrin is married to Michael Allemang, who was appointed to the board of the Ann Arbor Area Transportation Authority in 2015. They live on Ann Arbor's east side, near the University of Michigan's north campus.

A Democrat, Bobrin is an active supporter of candidates for local office. In 2012, Bobrin and Allemang served on the Our New Downtown Library campaign committee to support the Ann Arbor District Library’s $65 million bond proposal for a new downtown building. That proposal, which was on the Nov. 6, 2012 ballot, was not approved by voters.

Aug. 3, 2004: Is unopposed in the Democratic primary for county drain commissioner, getting 17,469 votes.

Aug. 8, 2000: Is unopposed in the Democratic primary for Washtenaw County drain commissioner, getting 7,370 votes countywide.

Nov. 5, 1996: Is unopposed in the general election and is re-elected to a third four-year term in the position of county drain commissioner. 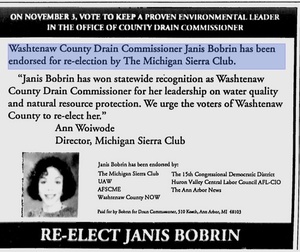 Aug. 4, 1992: Is unopposed in the Democratic primary for re-election as drain commissioner, getting 11,480 votes countywide.

1975-1988: Works as manager of water quality programs for the Southeast Michigan Council of Governments (SEMCOG).

1975: Graduates from the University of Michigan.

Resolution passed by the Washtenaw County board of commissioners in appreciation of Bobrin's 24 years of service – Dec. 5, 2012