Democrat Jeff Irwin of Ann Arbor won the 2010 election for 53rd House District state representative. He won a re-election campaign for the same seat in 2012, and again in 2014. He ran unopposed in the Aug. 5, 2014 Democratic primary and beat Republican John J. Spisak in the Nov. 4 general election. 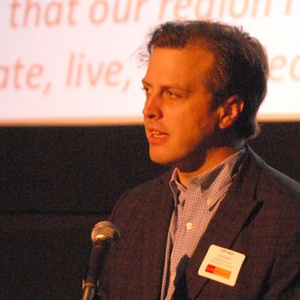 Jeff Irwin at a July 23, 2014 candidate forum hosted by the Arts Alliance at Michigan Theater. (Photo courtesy of The Ann Arbor Chronicle.)

He had previously served for 11 years on the Washtenaw County Board of Commissioners, including a stint as board chair.

Irwin was born in 1977 and grew up in Sault Ste. Marie, Michigan. His father, Mitch Irwin, was a state senator from that district. Coming to Ann Arbor in 1995, Jeff Irwin studied political science at the University of Michigan and was active in local and campus government. He was treasurer of LSA Student Government and on the board of the Ann Arbor Tenants’ Union. He also worked on the political campaigns for several local Democrats, including Alma Wheeler Smith, Chris Kolb, Rebekah Warren and Liz Brater.

In 1998 he worked as a Legislative Aide to state Senator Alma Wheeler Smith, and later worked with the League of Conservation Voters Education Fund.

In August 1999, he ran successfully for the first time for a seat on the Washtenaw County Board of Commissioners – for one of the districts representing Ann Arbor, following the resignation of Dave Monforton. He held that seat for several back-to-back two-year terms and served for a period as board chair, until deciding to run for state representative in 2010.

The Michigan Jaycees named him “Best Young Government Leader of the Year” in 2000, and the Workforce Development Board named him “Best Elected Official” in 2007. He also was a founding member of Partners for Transit, a group that advocates for countywide public transit in Washtenaw County.

Irwin is married to attorney Kathryn Loomis, his high school sweetheart. They have two children, Sylvia and Mackinac, and live in Ward 3 in the city of Ann Arbor. They hold an annual picnic at their home – called "Burgers on Bellwood" – which draws politicians, political activists, community leaders and neighbors.