Jeremy Peters is a musician and director of creative licensing & business affairs for V4 Holdings/Ghostly Songs. He is also a member of the Ann Arbor Planning Commission. He was nominated by mayor John Hieftje and appointed by the city council for a term from July 1, 2013 through June 30, 2016. 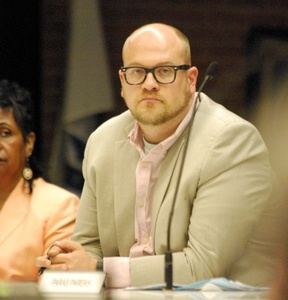 Jeremy Peters at the June 3, 2014 meeting of the Ann Arbor planning commission. (Photo courtesy of The Ann Arbor Chronicle.)

In addition, he's a partner and co-founder of Quite Scientific Records. In 2014, he closed down his consulting firm, WorkForward Media, which provided consulting services for clients in the political, arts and nonprofit sectors.

Peters is active in the Democratic Party and was a field organizer for Barack Obama's 2008 presidential campaign. Locally, he has supported Democratic candidates Christopher Taylor, Kirk Westphal and Julie Grand, among others.

Peters serves on the board of the nonprofit 826michigan and is a professional vocalist (bass) with Christ Church Grosse Pointe and Audivi Vocem.

Peters earned his bachelors degree in political science and music from the University of Michigan.

He maintains a personal blog at http://jeremypeters.org/.