Jerry Clayton is the Washtenaw County Sheriff. A Democrat, he was first elected in November 2008 in a countywide race, and re-elected in 2012. His current four-year term runs through 2016. 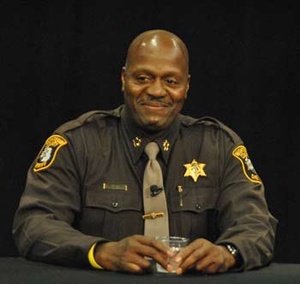 Jerry Clayton at an Oct. 10, 2012 League of Women Voters forum at the studios of Community Television Network.

Clayton stated his priorities in the 2008 race to be returning to a more community-policing, root causes approach, shifting away from the controversy of contract road patrols.

He has been a certified criminal justice trainer and instructor for more than sixteen years, specializing in a multitude of subject areas including; use of force disciplines, physical training, special weapons and tactics, cultural diversity, preventing racial profiling, and in the areas of staff management and supervision, developing customer service delivery strategies, and organizational leadership. He provided consulting services to the U.S. Department of Justice- National Institute of Corrections, assisting in the development and delivery of various training curricula to local, state and federal correctional agencies throughout the United States.

Clayton lives in Ypsilanti Township with his wife, Sybil. The couple has three sons: Jerry Jr., Jeron and Jalen.

June 2014: Is named one of the 2014 Men of Excellence by the Michigan Chronicle.

December 2012: Is appointed by Gov. Rick Snyder to a 4-year term as a member of the Michigan Commission on Law Enforcement Standards. Serves as chair of that group.

DATE? Graduates from the Eastern Michigan University School of Staff and Command and from the SCH Executive Leadership program.

DATE? Graduates from Eastern Michigan University with a degree in organizational communications.

Proposal 1 is the only solution for our unsafe roads (column co-authored by Clayton) – Detroit Free Press, March 28, 2015

Statement from Clayton at the start of his second term – Sheriff's office website, January 2013

Washtenaw County Board of Commissioners working session (March 18, 2010): At Thursday’s working session for commissioners, sheriff Jerry Clayton laid out staffing needs for a jail expansion that’s set to open this summer. If approved by the board, over the next two years the corrections division will add 39 full-time employees to its current staff of 103 workers.

County Board Gets Update From Sheriff – The Ann Arbor Chronicle, Feb. 20, 2010