Jim Leija is director of education and community engagement for the University Musical Society. He was elected to the board of the Ann Arbor District Library in November 2014 for a four-year term beginning on Jan. 1, 2015. 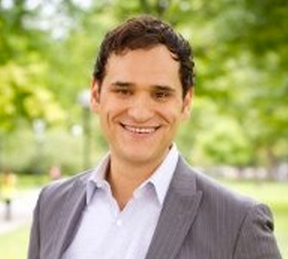 Leija has worked for UMS in various roles since 2008. He holds three degrees from the University of Michigan, including an MFA in art and design.

In addition to his life as a performing arts administrator, workshop leader and peer educator, Leija also is a director, filmmaker and performance artist. His works have been seen at Dixon Place in New York City, the Ann Arbor Film Festival, the Performance Studies International Conference, as well as venues in Toronto and Chicago. His nonfiction essay “Dance or Die” was published in the anthology “Queer and Catholic” (Routledge Press, 2008).

Leija and his partner Aric Knuth – director of the New England Literature Program in the Department of English Language & Literature – live on Ann Arbor's southwest side.

June 2011: Is promoted to director of education and community engagement for the University Musical Society (UMS).

2010-2011: Works as manager of new media and online initiatives for the University Musical Society (UMS).

2009-2011: Provides social media and web marketing services as an independent consultant for the Nonprofit Enterprise at Work (NEW).

2008-2010: Works as a public relations manager for the University Musical Society (UMS).

2006: Is selected as a Community of Scholars Fellow at the Institute for Research on Women and Gender.

June-August, 2005: Works as an intern for performance programs at the Museum of Contemporary Art in Chicago.

2004-2006: Works as a graduate student instructor for undergraduate sociology and American culture courses.

2007: Earns MFA in art & design (multimedia performance & video) from the University of Michigan.

2002: Earns BA in sociology from the University of Michigan.

2002: Earns BFA in musical theater performance from the University of Michigan.