Joan H. Lowenstein (b. 1956) is an attorney "Of Counsel" in the downtown Ann Arbor office of Jaffe Raitt Heuer & Weiss.  She serves as a member of the Ann Arbor Downtown Development Authority Board. She served as a Democrat on the Ann Arbor City Council, representing Ward 2 from November 2002 to November 2008, and prior to that from September 2000 to November 2001. 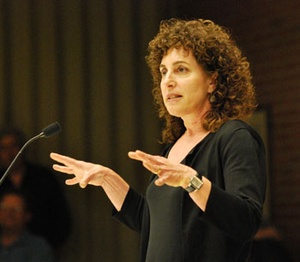 Joan Lowenstein speaking during public commentary at a June 2010 meeting of the Ann Arbor city council. (Photo courtesy of The Ann Arbor Chronicle.)

Lowenstein was appointed to a partial city council term in August 2000 to complete the term of Republican Dee Freiberg, who moved out of the city. Councilmember Joe Upton, a Republican who also represented Ward 2, cast the only vote against her appointment. She ran for election in 2001 but lost to Republican Mike Reid. In 2002 she ran again and this time prevailed against her Republican opponent, Jeff Hauptman. She was re-elected in 2004 and 2006.

When asked by the Washtenaw Legal News about her proudest accomplishment on the Council, Lowenstein cited her sponsorship of an ordinance revision that protected breastfeeding in public.

She was first appointed to the DDA on Aug. 6, 2007, while still serving on city council. She replaced Rob Aldrich on the DDA. Her current term on the Ann Arbor DDA runs from September 6, 2011 to September 6, 2014.

In 2008, rather than seek re-election to the council, Lowenstein ran unsuccessfully for a judicial seat on the 15th District Court in Ann Arbor, following the retirement of judge Ann Mattson. She was one of four candidates in a nonpartisan judicial primary in August, running against attorney Margaret Connors (wife of 22nd Circuit Court judge Timothy Connors); Ann Arbor city councilmember and attorney Chris Easthope; and assistant county prosecutor Eric Gutenberg. The top two vote-getters in August – Easthope and Gutenberg – advanced to the November election, which Easthope won.

In September 2013, Lowenstein created the weblog "Making Ann Arbor a Better City", with the intent to "inspire the good leaders, deter the bad, and make the change that is inevitable a little less scary."

Lowenstein serves as co-chair – along with attorney Jerry Lax – of the Jewish Federation of Greater Ann Arbor's Cardozo Society, with the mission "to strengthen relationships among Jewish attorneys, judges and law students in Ann Arbor through education and leadership, while working together to enhance the quality of Jewish life in Ann Arbor and throughout the world." She also serves on the Jewish Federation's board.

At Jaffee Raitt, Lowenstein is a member of the firm's Intellectual Property/IT Practice Group, specializing in libel, privacy, trademark and copyright litigation. She previously worked for the law firm Seeligson, Jordan, DeLoof & Hopper. She has been a lecturer at the University of Michigan, and was a columnist for the Ann Arbor News from 1988-1991.

18 May 2015. Ann Arbor City Council discussion of reappointment of Joan Lowenstein to the Ann Arbor DDA.

Much has been made of the victory of “independent” candidate Jane Lumm over Democratic Councilmember Stephen Rapundalo in the Nov. 8 election. I am sad about the result, not only because Rapundalo is a friend and former colleague, but because it heralds an un-Ann Arbor- like conservatism in the city’s increasingly aging population.