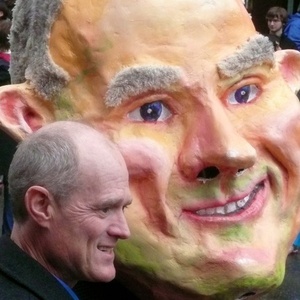 John Hieftje with a caricature of his head made for the FestiFools parade. (Photo by Peter Honeyman)

A Democrat, Hieftje was first elected to the Ann Arbor City Council in 1999, representing Ward 1. The following year, in 2000, he ran a successful campaign for mayor and was subsequently re-elected every two years until 2014, when he decided not to run again.

Because of his service as mayor, he has been a lecturer with the University of Michigan Ford School of Public Policy. Before being elected as mayor, he worked as a Realtor for the Charles Reinhart Company.

Hieftje earned a B.S. in political science from Eastern Michigan University in 1997. He graduated from Ann Arbor Pioneer High School.

He is a member of several conservation and environmental groups, including The Wolfpack of the National Wildlife Federation and the Sierra Club.

He is married to Kathryn Goodson, a pianist. They live in the Burns Park neighborhood. Hieftje has a son from his first marriage, Josh Hieftje.

2007:  Is appointed to the Michigan Climate Action Council by Governor Jennifer Granholm.

Nov. 2, 2004: Wins general election against Republican and former Ward 2 city councilmember Jane Lumm. (Lumm later runs for and wins election in 2011 to represent Ward 2 again on city council as an independent. She defeats Stephen Rapundalo in the general election that year.) Hieftje gets 38,067 votes (68.65%) compared to 17,285 votes (31.17%) for Lumm.

2004: Joins board of directors for the Lake Superior Conservancy and Watershed Council in Sault St. Marie, Ontario.

2002-2013: Serves as the city's representative on the Ann Arbor Downtown Development Authority board.

1998: Joins board of directors for the Huron River Watershed Council.

1997: Joins neighbors around Ann Arbor's Leslie Science Center to block what they deemed an oversized expansion plan for the city-owned facility. His involvement in this effort led to his decision to seek election to city council.

1997: Earns B.S. in political science from Eastern Michigan University, after having dropped out of college in his youth.

DATE? Works as a Realtor for the Charles Reinhart Company.

DATE? Serves as a surveyor for the U.S. Forest Service in northern Michigan.

John Hieftje exit interview: 'I've accomplished everything I ever really set out to do' – MLive, Nov. 10, 2014

The Hieftje Decades: The Mayor Sees Even Tougher Times Ahead – Ann Arbor Observer, May 2011

Ann Arbor mayor vying for state appointment – Ann Arbor News, Aug 1, 2007 ("Hieftje said he is in the running to be the next the chairman of the three-member Michigan Public Service Commission, which regulates the state's investor-owned natural gas, electric and telecommunications utilities, rural electrical cooperatives, and interstate motor carriers." He did not receive the appointment.)