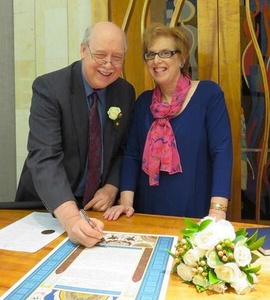 John Hilton and Eve Silberman at their 2013 wedding. (Photo from the Ann Arbor Observer Twitter feed.)

Hilton and Patricia Garcia bought the publication in 1986 when Don and Mary Hunt, founders of the Observer, decided to retire. Garcia is the publication's publisher and president. For many years it was located at offices in Kerrytown, at the corner of Catherine and Fourth. But in 2012 Garcia and Hilton bought a building at 2390 Winewood, between West Stadium and South Maple, and moved the offices there.

Hilton serves on the board of the Kerrytown BookFest. In 2009 he received the Leader in Literary Arts (LILA) award from the Ann Arbor Book Festival. The awards are given to "individuals and organizations that significantly contribute to making Ann Arbor a place where the literary arts are nurtured, prized, respected, and thrive."

In 2013 Hilton married Eve Silberman, the Observer's profiles editor/writer. They live in Ann Arbor's near north side, near Wheeler Park. Hilton is active in the North Central Neighborhood Association (formerly the North Central Property Owners) and is editor of the association's blog.

He has a grown daughter – Kathryn (Kati) Shanks – from his first marriage to Paula Shanks, who died in 2004.