John Mouat is an Ann Arbor architect and partner in Mitchell and Mouat Architects, a downtown Ann Arbor firm that's been in business since 1994. 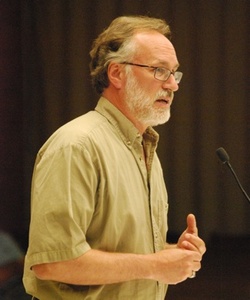 John Mouat at a June 2014 meeting of the Ann Arbor planning commission. (Photo courtesy of The Ann Arbor Chronicle.)He is a member of the Ann Arbor Downtown Development Authority board, and was elected to serve as board chair in July 2014. He was first appointed to the DDA board in 2007, and reappointed in 2011 and 2015. His current and final term ends in 2019.

His past community service includes terms on the Ann Arbor YMCA board, Washtenaw Area Transportation Study (WATS), and Ann Arbor Civic Theatre. He also served on the group that reviewed proposals for the city's 415 W. Washington Street redevelopment.

He is the lead architect for renovations undertaken by the Ann Arbor Housing Commission, as it upgrades and rebuilds its public housing stock through a public-private partnership using low-income housing tax credits.

Mouat lives on the Old West Side with his wife, Lisa Snapp, who is director of the Climate Analysis and Strategies Center in the US EPA’s Transportation and Climate Division in Ann Arbor. They have two daughters.

In June 2013, their home on West Washington received an historic preservation award from the city's historic district commission. From the award narrative:

This simple Queen Anne home  was built in 1890 by David Allmendinger, who founded the Ann Arbor Organ Company. The home featured an elaborate garden in the rear, with ponds and a gazebo. He raised his 13 children here, and a descendent lived in the house until 1992. John and Lisa purchased it from those original owners and updated it with preservation in mind. Historic aspects of the interior were retained, and they did significant landscaping, including the introduction of a spring-fed pond.

In the summer of 2014, Mouat installed a Little Free Library in front of his house.