John Splitt is the owner of Gold Bond Cleaners in downtown Ann Arbor, and is a member of the board of the Ann Arbor Downtown Development Authority. He is also a board member of the State Street Area Association. 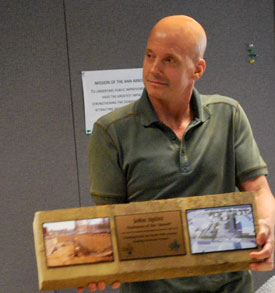 John Splitt holds the commemorative plaque he received in July 2010 as outgoing chair of the Ann Arbor Downtown Development board. It's fashioned from earth retention lumber from the Library Lane underground parking structure on South Fifth Avenue. (Photo courtesy of The Ann Arbor Chronicle.)Splitt was first nominated for the DDA board by mayor John Hieftje in October 2006, and confirmed by the Ann Arbor city council, to replace attorney Bob Gillett. He was reappointed in 2010 for another four-year term, and reappointed again in 2014. His current term runs from June 1, 2014 to May 31, 2018. His tenure has included a stint as DDA board chair. He currently (2014) serves as co-chair of the DDA's operations committee.

In 2009, as a representative of the DDA, Splitt served on the city's RFP (request for proposals) review committee for development atop the Library Lane underground parking structure on South Fifth Avenue, which the DDA was constructing. The committee recommended a proposal by Valiant Partners for a conference center and hotel, but the city council did not support that project and formally ended the process in April 2011.

Splitt has not run for office, but has supported various Democrats in local races.

Splitt grew up in Ann Arbor and is married to Judy Splitt, the owner of Salon 344 on the corner of Ashley and William. They live in a nearby house, on the western edge of the DDA boundary.