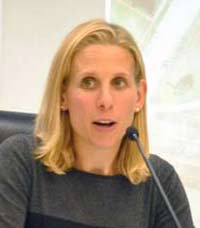 Julie Grand at the March 2013 meeting of the Ann Arbor park advisory commission. (Photo courtesy of The Ann Arbor Chronicle.)Julie (Berson) Grand (b. 1974) has served as a Democrat on the Ann Arbor City Council, representing Ward 3, since November 2014. Grand was elected on Nov. 4, 2014, filling the seat held by Christopher Taylor, who was elected mayor of Ann Arbor that same day. Grand had won a three-way Democratic primary in August 2014 against Bob Dascola and Samuel McMullen.

She is a former chair of the Ann Arbor Park Advisory Commission (PAC).

In 2013, she ran for the Ward 3 Ann Arbor City Council seat held by Stephen Kunselman, whom she faced in the Aug. 6th, 2013 Democratic primary election. She lost that race against Kunselman.

Grand is married to David R. Grand, U.S. Magistrate Judge for the Eastern District of Michigan. They have two children (Maddie and Sam – ages 8 and 5, respectively, in 2014). The family lives in the Burns Park neighborhood and are members of Temple Beth Emeth.

Nov. 4, 2014: On her 40th birthday, Grand wins the election to represent Ward 3 on the Ann Arbor City Council. A Democrat, she ran unopposed in the general election. Campaign website: http://votegrand.org/