A regular at the Ann Arbor Farmers Market.

Kapnick's Apple Festival at the farm in Britton, MI in October, in conjunction with the Appleumpkin Festival in Tecumseh, MI. 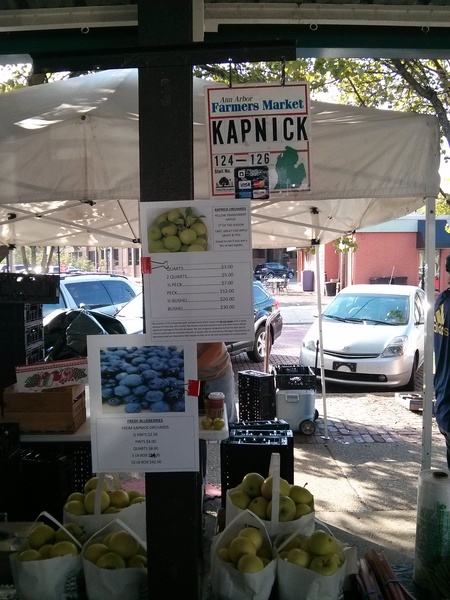 From their web site:

Kapnick Orchards has been a family owned business for many years. It was founded in 1958 by Robert and Gertrude Kapnick and Charles and Janice Kapnick. Our farm market, near Tecumseh, was first opened in 1961. In 1975, Charles and Janice purchased the market from Charles' parents Robert and Gertrude Kapnick. Currently the market is operated by Sharon and Bruce Shaffer and Scott Robertello, who purchased the farm from Janice in 2001. Sharon is the daughter of Janice and Charles. In 2001, Kapnick Orchards celebrated their 40th anniversary. During the forty years, Kapnick Orchards has seen many changes. It was transformed from a one room store to the larger operation of today.

Vazquez claims that Kapnick Orchards violates the spirit, if not the letter of that policy by purchasing its baked goods from Hill and Valley Premium Bakery and reselling them at the market. Kapnick Orchards spokesman Scott Robertello declined comment beyond characterizing Vazquez's beef as a "personal vendetta."