Karen R. Levin is a psychotherapist and member of the Ann Arbor park advisory commission. 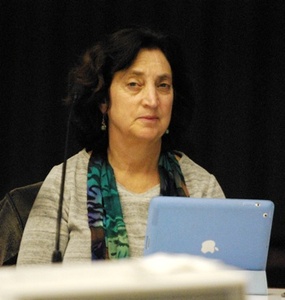 Karen Levin at a February 2014 meeting of the Ann Arbor park advisory commission. (Photo courtesy of The Ann Arbor Chronicle.)She has a masters degree in social work from the University of Michigan, and is a licensed master social worker and certified school social worker. Her areas of practice include family & marital psychotherapy, body mind approaches, trauma/PTSD, anxiety disorders, and child & adolescent psychotherapy.

She was first nominated for the city's park advisory commission by mayor John Hieftje and confirmed by the city council in September 2009, for a term running through Sept. 20, 2012. In 2012 she was reappointed for a term ending Oct. 14, 2015.

She has chaired PAC's dog park subcommittee, which has been developing guidelines for identifying new dog parks within the city.

Levin is also a member of Ann Arbor Kirtan, a nonprofit group of volunteer musicians and singers, coming from a variety yoga disciplines, who engage in chanting as a spiritual practice.