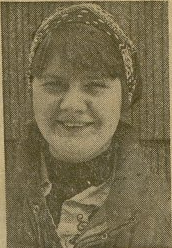 Kathy Kozachenko  (b. 1954) served on the Ann Arbor City Council as a member of the Human Rights Party representing Ward 2 from April 1974 to April 1976.

Kozachenko's April 1974 election to a seat on the Ann Arbor City Council, made her the first openly gay or lesbian American to run successfully for political office.

Kozachenko ran on the ticket of the local, progressive Human Rights Party (HRP), which had already succeeded in putting two of its members on the Council in 1972 – Gerald C.DeGrieck (Ward 1) and Nancy Wechsler (Ward 2).

Kozachenko's HRP predecessor in the primarily student Second Ward council seat, Nancy Wechsler, had come out as a lesbian during her first and only term on City Council, thus becoming the first openly lesbian public-office holder in the United States. However, Wechsler did not win office as an open lesbian; thus, Kozachenko was the first openly gay or lesbian candidate to win public office in the United States.