Keith Orr is the co-owner of \aut\ BAR and the Common Language Bookstore in Ann Arbor, along with co-owner Martin Contreras, Orr's husband. Orr also serves on the Ann Arbor Downtown Development Authority board, holding a seat designated for a downtown business owner. 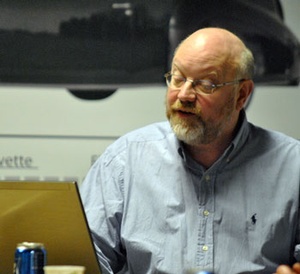 Keith Orr at a March 2013 meeting of the Ann Arbor DDA board. (Photo courtesy of The Ann Arbor Chronicle.)

He was nominated to the DDA board by mayor John Hieftje and confirmed by the city council in November 2008. He replaced Dave DeVarti, who had served on the board since being appointed by former mayor Liz Brater, and who had indicated an interest and willingness to continue service. Orr was reappointed in 2012 for a term from August 20, 2012 to August 19, 2016. (Copy of Orr's application/resume.)

Orr is a graduate of Interlochen Arts Academy. He studied at Boston University, and received a bachelors degree in music from the University of Michigan in 1981. After college, Orr started working at Tec-Ed – an Ann Arbor a usability research and interaction design computer firm – as a courier and administrative support staff, then moved to writing programs in BASIC. He was also a bassist with the Toledo Symphony, having started playing there in 1977 at the age of 19.

Orr's connection to the bass and the world of music is the one that first included him in the circle of acquaintances of mayor John Hieftje, who is married to Kathryn Goodson, a classical pianist. The connection remained one of social acquaintance until policy-type interactions evolved between Orr and the mayor in connection with The Gallery project proposed at the site of the Greek Orthodox church on North Main Street. Orr, working with the Kerrytown District Association, was part of an effort to work with the developer to get the kind of project that the association could support.

Orr's main business is the \aut\ BAR (the name is the phonetic spelling of "out"), located in Kerrytown's Braun Court. He and Contreras, who've been together since the mid-1980s, turned La Casita de Lupe into the \aut\ BAR in 1995. They were among the finalists for The Ann Arbor News' Citizen of the Year Award in 2008, in part because of their fundraising efforts on behalf of various nonprofits, especially related to LGBT issues. Orr was the first person to use Fred Phelps' homophobic pickets as a fundraiser for gay rights – for each minute that the pickets stayed outside the Aut Bar, people pledged money toward the Washtenaw Rainbow Action Project (WRAP). The fundraiser was very successful, and groups in other communities have copied the approach.

Contreras and Orr were among 300 other local same-sex couples who were married in March of 2014 after a federal judge struck down the state's ban on marriage equality and before the sixth circuit court of appeals put the decision on hold. The American Civil Liberties Union of Michigan filed a lawsuit on the behalf of eight couples, including Contreras and Orr, who were legally married during the window. The ACLU argued that the state is violating the couples' due process and equal protection rights by refusing to recognize the marriages.

The couple had previously been represented by the ACLU in 2012. The ACLU sued the state on behalf of Orr and Contreras, who wanted to post signs supporting Congressman John Dingell and Carol Kuhnke, a judicial candidate. The Michigan Liquor Control Commission had a policy that banned liquor license holders from displaying political party and candidate signs on their properties, but as a result of the lawsuit, the MLCC agreed to stop enforcing that policy.

The Accidental Activists of Ann Arbor's Homoplex – Between The Lines, Oct. 2, 2014