Kirk Westphal (b. 1970) has served on as a Democrat on the Ann Arbor City Council representing Ward 2 since November 2014. He is a filmmaker and urban planner, and operates Westphal Associates LLC with an office in downtown Ann Arbor. Examples of his work include the videos "Insights into a Lively Downtown" and "The Council-Manager Form of Local Government." 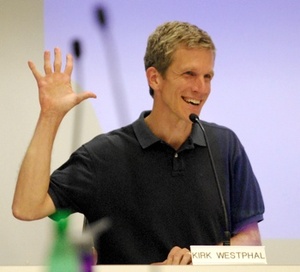 Kirk Westphal at the July 2014 meeting of the Ann Arbor planning commission. (Photo courtesy of The Ann Arbor Chronicle.)

Westphal won the 2014 August Democratic primary election in Ward 2, defeating Nancy Kaplan. He was unopposed in the Nov. 4, 2014 general election. The two-year term is for a seat previously held by Sally Petersen, who ran unsuccessfully for mayor instead of seeking another term as councilmember.

He also was the Democratic Party candidate for Ann Arbor City Council in Ward 2 in 2013, but in the November 2013 general election, he lost to incumbent Jane Lumm.

Westphal is married to Cynthia Kortman Westphal, an assistant professor of musical theater at the University of Michigan School of Music. They have two young sons, August and Harry, and live in the Glacier Highlands neighborhood on Ann Arbor's east side.

Westphal began his public service while earning his master’s in urban planning at UM. “I got to know the mayor,” he explains, “because I took his class in public policy school … I had also asked him about keeping me aware of any opportunities to volunteer.” [Mayor John Hieftje teaches a course as a lecturer at the UM Ford School of Public Policy: "Local Government, Opportunity for Activism."]