Knight's Market, which long ago begat Knight's Steakhouse, is at 420 Miller at the corner of Spring, just a few blocks from downtown. 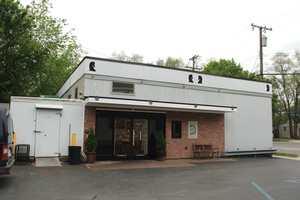 Entrance to Knight's Market, on the building's north side.

The market is a grocery store in addition to being a full-service butcher. It manages to stock the selection of a much larger store in a tiny building. The prices are average, generally in line with Busch's and usually a bit cheaper than Sparrow Meat and Produce.

The entrance is around the back next to the parking lot, on the north side of the building. The entrance and interior were renovated in 2011.

Ray Knight bought the former Ty's Market on the corner of Spring and Miller in 1952. His daughter, Sherry Knight Bedolla, took over operating the market in 2009. You can often find her behind the counter.

In 2012, the Knights won approval from Ann Arbor city council for a 1,200-square-foot addition plus an expansion and reconfiguration of the parking lot. The project also includes plans to convert the house adjacent to the market on Spring Street into a commercial kitchen or bakery. The kitchen would be used to make prepared foods that would be sold out of the market and the Knight family's restaurants in Ann Arbor and Jackson.

Knight's Gambit: A daughter takes over the family market – Ann Arbor Observer, May 2009