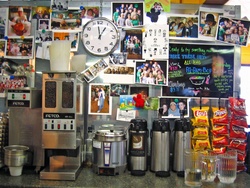 The blackboard at Kosmo Deli

Kosmo is a lunch counter located in Kerrytown, owned by Don Kwon, who took over the business in January of 2001 from previous owner Henry Park who was known as a human institution to all who knew Kerrytown. Don's mother still works there with him supervising on all the homemade sauces and marinades. Kosmo is affordable, delicious, unique, and one of the best places downtown for an easy lunch and early dinner.

Kosmo's menu is a very clever and homey mix of drawings, printed signs, and photos. Don is a photo nut and a lover of the fisheye lens. Many of his photographs of dishes and patrons are simply fantastic. The menu includes American and Korean dishes, such as:

...and more. The staff is extremely friendly and know most regulars by name, and the relaxed, cordial atmosphere is really the heart of Kerrytown.

Don has expanded into the space formerly occupied by Kav's Cafe, so Kosmo is now about twice as big as it used to be. One thing to know about Kosmo is that it can be packed on Market Days (Wednesday and Saturday Mornings), and is especially jammed during Community High School's lunch hour, from 11:45-12:30. (Actually, the lunch period is from 11:20-12:05, but there's probably a lot of spillover) Also, there is an "adult rush."

Kosmo offers an array of interesting fusion dishes that I don't think ever graced a Steve's Lunch menu (um, hot dog wrapped in bacon topped with kimchi?). This is a diner, so the quality of beef is good but not the great melt in your mouth stuff you'll find at more expensive Korean restaurants. This shouldn't deter you from ordering their tasty bulgogi, however. Plus, the sauce that comes with it is fantastic. Plus plus: cheap cheap! (4 star)