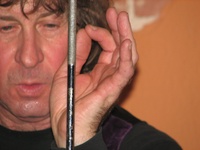 Jim "Largebeat" Gertz is a long time Ann Arbor resident and local musician who creates some of the most original music that you will find. He earned his nickname as a drummer early in his career, but now is the master of the theramin, an obscure instrument best known for it's contribution to the eerie sounds used in old science fiction films and (most notably) in the tune "Good Vibrations" by the Beach Boys. Jim died February 6, 2019 at 66 years old.

“Trains, rock ’n’ roll, and UFOs are what my life’s about,” says shaggy-headed rocker Mr. Largebeat. By day, the longtime Ann Arbor resident (aka James Gertz) is caretaker at Arbor Brewing Company. Off the clock, the Theremin playing bandleader has released four albums of space-surf-prog-train rock. His 1999 release Mystery of the OVNIs: A Tale of UFOs is a full-on extraterrestrial rock opera.