Leah Gunn is a long-time Ann Arbor Democratic political activist and strategist. She is a former Washtenaw County commissioner representing District 9 in Ann Arbor, prior to redistricting that took effect in the 2012 election cycle. She also served as a member and chair of the Ann Arbor Downtown Development Authority board. 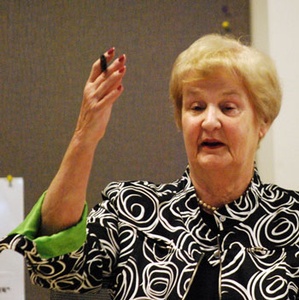 Leah Gunn at a March 2013 meeting of the Ann Arbor Downtown Development Authority board. (Photo courtesy of The Ann Arbor Chronicle.)

Gunn was first elected to the Washtenaw County Board of Commissioners in November 1996 for a two-year term starting in January 1997. She was subsequently re-elected every two years, until deciding not to run for office in the 2012 election. Redistricting would have put her into the same district – the new District 8 – as incumbent Yousef Rabhi, who successfully ran for re-election that year with Gunn's support.

During her tenure on the county board, she served as chair of the Urban County Executive Committee, and was also a member of several county appointed bodies, including 800 MHz, Head Start Policy Council, Washtenaw Literacy Coaltion, and the Retirement Commission. She was a champion for the development of the Delonis Center (a homeless shelter in Ann Arbor) and for the Washtenaw County Juvenile Center.

Gunn served for nearly 22 years on the Ann Arbor DDA board starting in 1991. Her most recent appointment by the Ann Arbor city council was for a term from August 6, 2009-July 31, 2013. She was not reappointed, and in November 2013 the city council voted to impose a limit of three terms for DDA board members.

Gunn has been married for over 50 years to Robert Gunn. They have two daughters, Meg and Linda, and granddaughters Katie and Madeline. She and her husband live in Ward 4, near on East Stadium Boulevard near Packard.

Her first name is pronounced as though it were spelled "Lee".