Leigh Greden (b. 1973) was chief of staff for Congressman John Dingell, as of August 2014. Previously, Greden served as the Executive Director of the Office of Government and Community Relations at Eastern Michigan University, a job he took in March 2010 after losing the 2009 Ann Arbor City Council race. 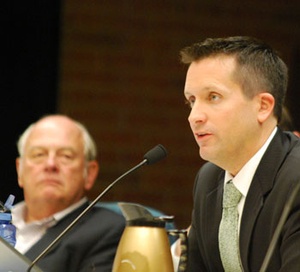 Leigh Greden at his final meeting as an Ann Arbor city councilmember, on Nov. 5, 2009.  In the background is Tony Derezinski, who served on council as a Ward 2 representative at that time. (Photo courtesy of The Ann Arbor Chronicle.)

Greden  served as a Democrat on the Ann Arbor City Council representing Ward 3 from November 2003 to November 2009. Greden was first elected to the Council in 2003, then re-elected in 2005 and 2007. He lost to Steve Kunselman by six votes in a three-way Democratic primary in 2009, though he garnered more votes than the third candidate, LuAnne Bullington. His defeat followed the disclosure of emails among certain councilmembers, including Greden, that were sent during council meetings. Greden's emails contained comments that were disparaging of fellow councilmembers Mike Anglin (Ward 5) and Sabra Briere (Ward 1). At his final meetings on council – on Nov. 5, 2009 – Greden apologized to councilmembers for that.

He was one of two candidates running in the 2006 Democratic primary for Ann Arbor's State Representative seat, vying with Rebekah Warren to replace term-limited Chris Kolb. Greden's campaign website was launched in February 2006 at http://www.votegreden.com . On August 8, 2006, Greden, with 39% of the Democratic primary vote, conceded the 53rd state representative race to Warren.

Greden also served on the Ann Arbor Housing Commission. He was nominated by mayor John Hieftje and appointed by the city council in January 2011 for a term from January 3, 2011 to May 2, 2016, replacing Jayne Miller. The term in that initial appointment resolution was incorrect, however, and in May 2011 the end date was changed to April 30, 2013. He did not seek reappointment.

Before taking the position at Eastern Michigan University, Greden was an attorney with the Ann Arbor law firm of Miller, Canfield, Paddock & Stone, focusing on employment and constitutional litigation. He also represented the Eastern Michigan University Board of Regents and the University of Michigan, as well as automotive and public utility clients. From 2000-2004, he was an associate with Dykema Gossett PLLC in Detroit. From 1995-1996, he was public liaison for the U.S. House of Representatives Office of Congresswoman Lynn Rivers, with responsibility for an area that included Ypsilanti.

Greden has been extremely active in local Democratic Party politics. He served as campaign manager for his friend and city council colleague, Chris Easthope, during Easthope's successful 2009 campaign for 15th District Court Judge.

Greden, who is single, grew up in Ann Arbor. His father is John Greden, a University of Michigan psychiatry professor and executive director of UM's Depression Center. Greden received a juris doctorate from Case Western Reserve University School of Law and a bachelor of arts degree in Political Economy from Albion College.