Mere days before the beginning of June 2008, Leopold Bros ceased all operations in Ann Arbor. Their move to Colorado will result in an operation that focuses exclusively on their distilling business, and will not entail opening a brewpub similar to their Ann Arbor establishment. On various blogs and to the Ann Arbor News, Todd Leopold cited increased rent as the reason for the departure. Ann Arbor City property records indicate that the 10,428 sq.ft. property, built originally in 1927, was sold in 1998 (prior to occupancy by Leopold Bros in 1999) for $560,000, and again in 2006 to a different owner for $1,800,000. In Michigan, Proposal A has the effect of keeping property tax increases in relative check, until a property changes hands. The effect of Proposal A can be seen in the taxes paid over the last three years on the property leased by Leopold Bros:

In February of 2008, Todd Leopold broke the news on AAiO that Leopold Bros. would be leaving town.

After years of warning that he expected their rent to spike and force them to relocate when their lease expired, particularly after the 2006 sale that triggered the dreaded Proposal A Popup for the new owners, Leopolds' lease came up for renewal, the rent spiked, and they decided to look elsewhere. At a higher level, Michigan's repressive liquor licensing laws have constantly thwarted Todd's desire to sell his world-renowned distilled spirits in this State, so the Leopolds are apparently taking this opportunity to move to a different licensing regime entirely: Colorado. In light of that State's recurring water shortages, perhaps the Bros' environmental business practices will branch out into capturing water vapor lost during distillation and bottling it for sale.

Leopold Bros. is a brewpub and distillery on Main Street. It was founded in 1999 by Scott and Todd Leopold, in a renovated century-old factory. The Leopolds' environmental ambitions were reflected in a number of ways in the planning of their facility, not just in reusing an old building, but in constructing the long pub tables out of reused materials and implementing an advanced water management system that reduced the amount of waste water in the brewing process so drastically that the greenhouse Todd attempted to maintain suffered from drought conditions.

The pub is a popular evening hangout, featuring long, beerhall-style communal tables, pool tables, and "the best jukebox in Ann Arbor", along with a rotating selection of organic microbrews; a small menu of quesadillas, salads, and other food; and renowned micro-distilled spirits. Try the "Michigin & tonic" (aka "red wing") for an introduction to Leopolds. 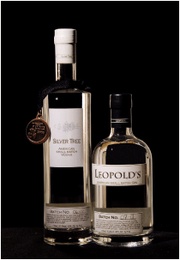 In recent years, the beer and brewpub have been somewhat eclipsed by the distilled liquors. Beginning with Todd's gin and vodka, their expanding line of liquors have won several national awards, and were specifically requested for the wedding of New York City Mayor Bloomberg's daughter.

Leopold Bros. aims to be "the world's first sustainable brewery," including a homegrown water management system and waste management strict enough that Todd has claimed that wooden shipping pallets are their only significant waste product.

The environmental streak runs in the family; Scott & Todd's grandfather is conservationist Aldo Leopold, author of A Sand County Almanac, and their father has served as the head of the American Society of Landscape Architects. The idea of a brewery and distillery grew from a general goal to provide an example of sustainable practices in some industry, though the environmentalism side of the business receives much less press now that the distilled spirits have taken center stage. Continuing the American tradition of brewers as leading citizens, Todd is also quite vocal on urban planning issues in Ann Arbor, advocating frequently for less protectionist regulation in downtown in order to divert development from surrounding farmland, provide more housing opportunities in town, and enable small businesses to better compete with deep-pocketed multinational developers and chains. In comments on ArborUpdate and Ann Arbor is Overrated, Todd frequently draws comparisons to his hometown of Boulder, CO, where he says that similar fears of "tall buildings", combined with a greenbelt program, have driven housing prices up and promoted sprawl even further from the city.