A lane connecting Division and 5th, between William and Liberty Streets.   Over the course of 2009 to 2012, the City of Ann Arbor constructed an underground parking structure in the block between Fifth, Division, William, and Liberty Streets. The underground structure, called Library Lane Parking Structure, replaced a surface lot generally called the library lot, both names due to the site's adjacency to the downtown branch of the Ann Arbor District Library.

The area on top of the structure, at street level, currently has 52 parking spaces and some greenscaping. Its future is undetermined and a matter of some contention, with a group called the Library Green Conservancy pressing to convert all or most of the surface area into a park, objecting to the city council's and DDA's proposal to make the area available for tax-paying development. The Conservancy generally dismisses the idea that the Diag plays the role of "central park" for downtown Ann Arbor, saying that University ownership makes it a "less public" space.

In July 2014, Ann Arbor city administrator selected the real estate broker CBRE to market the top of the Library Lane site for possible future development. He had received direction to engage a broker from the city council at its April 7, 2014 meeting.

In February 2015, CBRE issued an offering memorandum with a May 2015 deadline to submit proposals for developing the site. (.CBRE Offering Memorandum for Library Lane Lot.pdf) 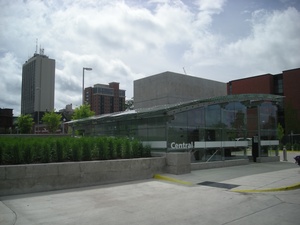 The Central entrance to the Library Lane Parking Structure in June 2013. 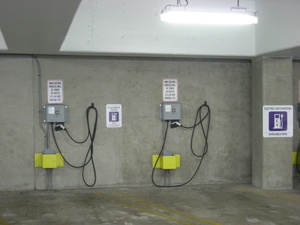 The EV charging stations at the Library Lane Parking Structure in June 2013.

The City is seeking creative proposals for the development of an approximate 1.2 acre lot owned by the City. The site is located at 319 S. Fifth Avenue, within the Downtown Development Authority District.

Under terms of the settlement signed on Monday, the city has agreed to comply substantively with a request that one of the plaintiffs – The Great Lakes Environmental Law Center – had originally made over two months before the lawsuit was filed. That request was to conduct a study of environmental impacts associated with construction of the new underground parking structure, which is being built by the Downtown Development Authority.

The landscaping along the Library Lane surface parking lot includes edible plants. Peppers and cherry tomatoes located next to the South Fifth Avenue sidewalk can be harvested by the public. 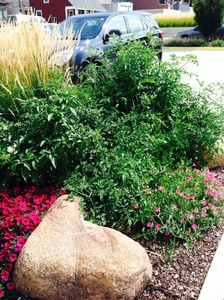 Pepper and cherry tomato plants next to the Library Lane surface parking lot, off of South Fifth Avenue.