Lisa Allmendinger has spent more than 30 years as a reporter and editor in newspapers and magazines. In July 2012 she started Chelsea Update, an online community news site that covers Chelsea, MI. 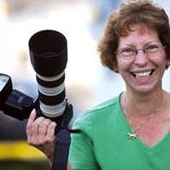 She's also editor of I Love Cats magazine, a position she's held since the international publication was founded in 1989.

Throughout her career, Allmendinger has worked as a sports writer, a city editor and an editorial page editor for a defunct daily newspaper in New Jersey. In Michigan, she wrote for The Chelsea Standard and The Dexter Leader, The Milan News Leader and the Saline Reporter. She also covered western Washtenaw County for The Ann Arbor News for a number of years.

In 2009, Allmendinger was hired as a reporter by the Ann Arbor Journal, a publication in the Heritage chain that launched July 9, 2009. In January 2011 she began working as a reporter for AnnArbor.com, but quit when she launched Chelsea Update.

Born in 1958, Allmendinger lives in Sylvan Township and is a 1980 graduate of the University of Michigan. She is related to Nascar driver AJ Allmendinger. She shows her dogs – Nova Scotia Duck Tolling Retrievers – in UKC competitions.